I grabbed some rf controlled power-sockets called 'Easy Home' from our local discounter 'ALDI'.
The package contained 4 sockets + (just) one remote.
I went online and looked for some sort of USB dongle that could switch those sockets and found a very cheap one called 'Home Easy'.
You probably noticed that 'Easy Home' != 'Home Easy'. I did too, but somehow hoped that I could use the dongle off the shelf.
I was wrong.

The following describes my process towards a gnuradio module to print out the codes of the original remote and then re-using those codes with an USB dongle of a different vendor. 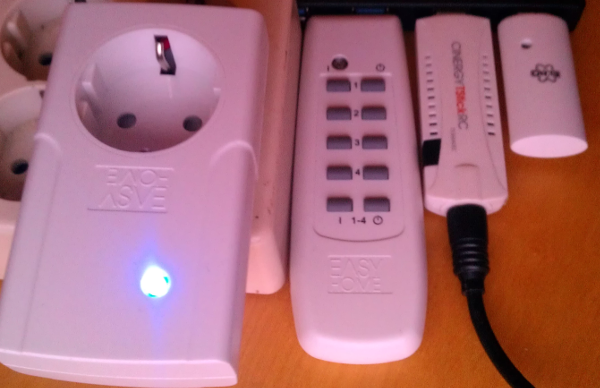 The 10 button remote allows on/off for all 4 sockets and has additional master-mode to on/off all of them at once.
On power up, the socket is in 'learning mode'. It waits about 30 seconds to receive an 'on' signal that is then assumed to be the correct one and internally sets some sort of identifier.
If no signal is received during that time frame, the socket takes the last stored identifier.
A socket can be taught to listen to one or multiple on/off buttons. Pressing 'off' during learning mode removes the button from the socket. Pressing master-mode off, results in all stored code getting deleted.
Vendor: Globaltronics GmbH & Co KG
Socket-Model: GT-FSI-07
Remote-Model: GT-9000

A DVB-T USB-dongle (tv-receiver) with an Elonics E4000 tuner that works as software defined radio for signal analysis.
There is open source software available that allows setting a frequency, bandwidth and sample rate and get I/Q data as output.


Guesswork, speculation and some luck

The power-sockets do not show the frequency they are using, so I guessed 433.92 MHz since most of those cheap consumer devices like weather stations can be found there.
I used baudline in combination with rtl_sdr to take a deeper look: 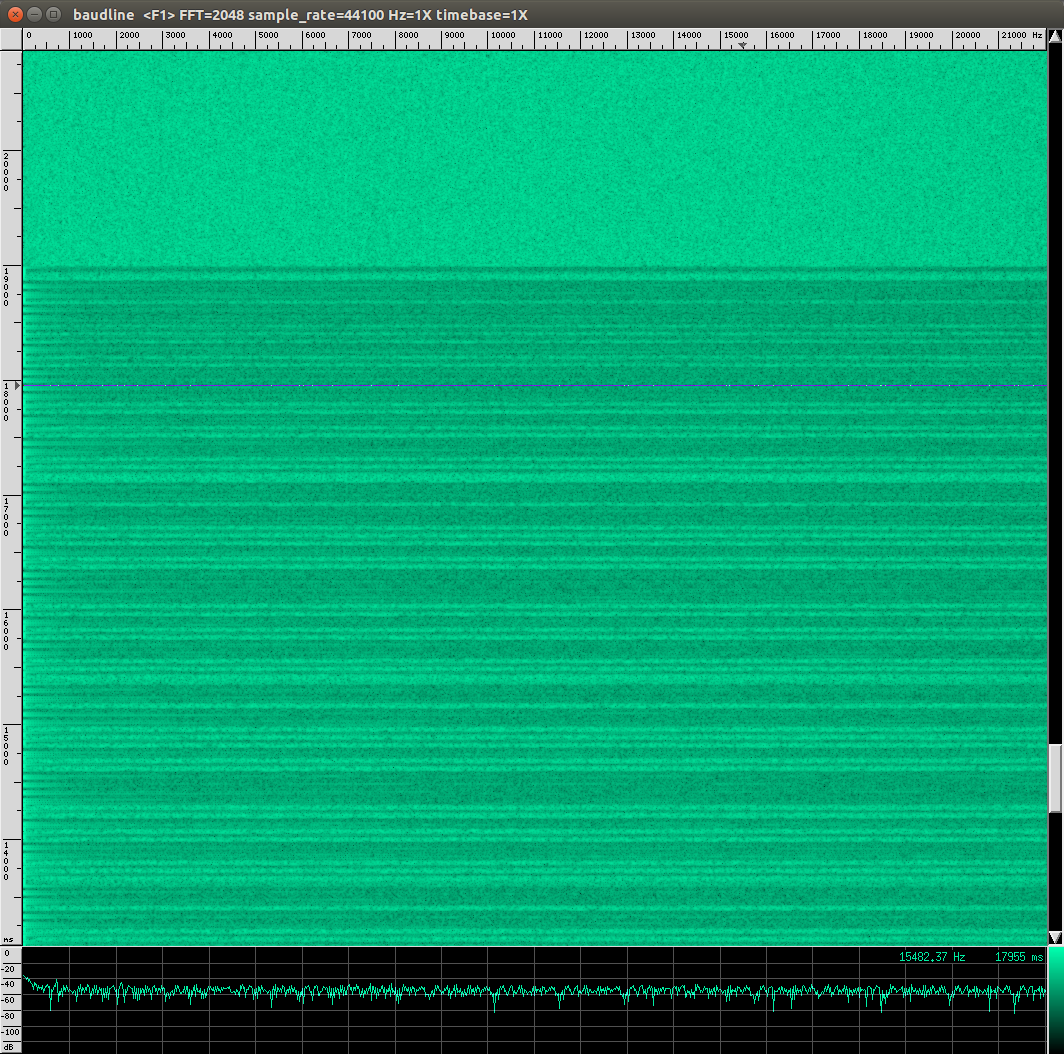 The output confirms my assumption. Once I press the button on my remote I can see 'stuff' passing through the histogram inside baudline.
Hint: You can stop the processing of new data with a right click and then selecting 'Pause'.

Looking into the options of baudline I spotted this parameter:

Since the output of the rtl_srd is I/Q data, I put that option on my 'try that' list. I also realized that I need to set the input format to unsigned int and then increased the baudline sample rate to 1e6. 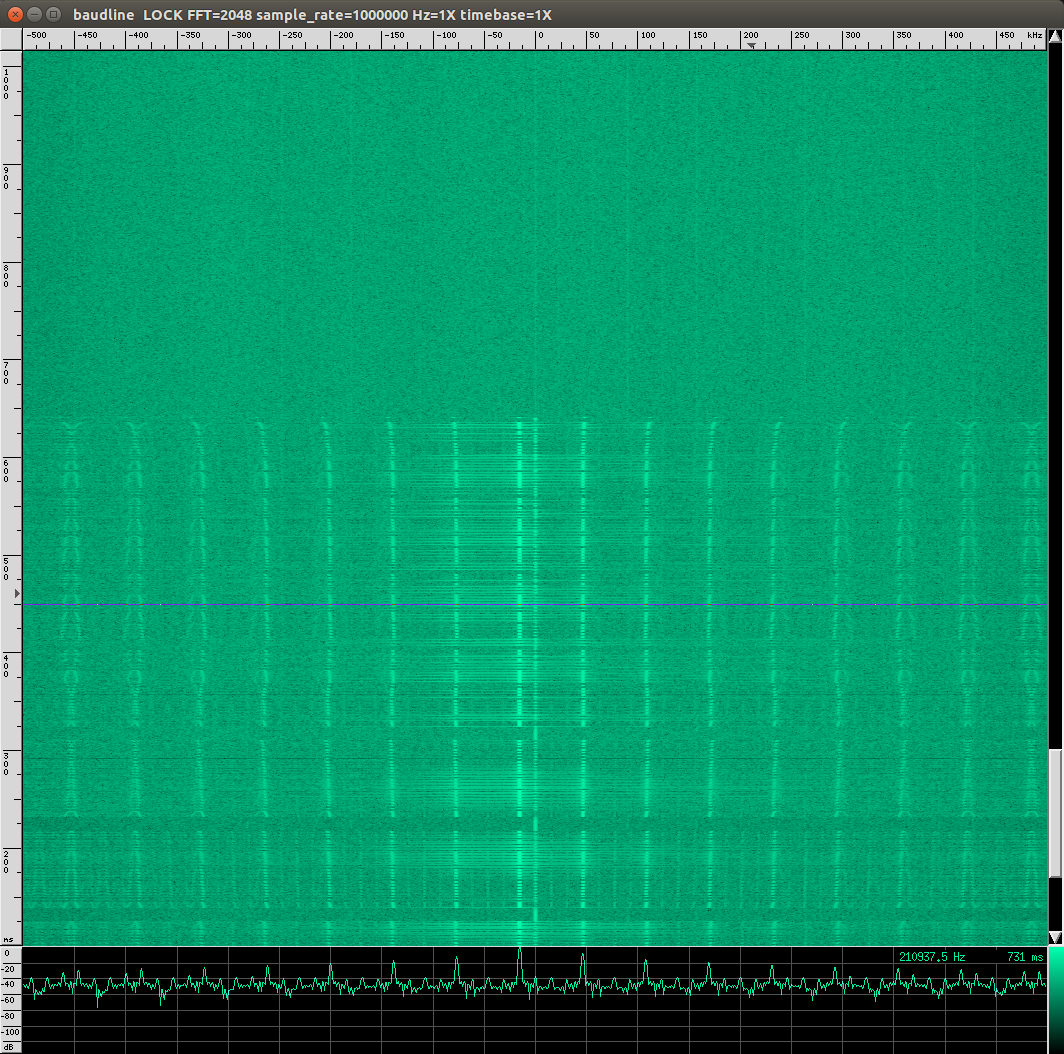 To get a better look at the signal I switched to the waveform display. (right click, then select displays, then waveform)
Using ALT+(Left/Right) allows to scale the time and reveals the data I am looking for:

(the waveform without scaling)

With some sample waveform images and the assumption that long blocks represent a binary one and that short blocks a binary zero, I was able to write down some binary codes for the buttons on my remote.
It is not visible in the pictures but some blocks are longer than the 'long blocks' and seem to mark the end of the code which repeats a few times.
One extracted code would be:

At this point I did not bother to go into what those bits might mean. I only knew that that they all had the same prefix:
1101 which might address the model of socket and that the last 4 bits id one of the 5 button sets.
I also saw that there are multiple repeating codes for the same button.

With 10 buttons in total and a unknown number of codes per button I did not bother to obtain more samples manually. At this point I was more tempted to play with my new USB rf-sending device.
I made some notes about the duration of the signals, since I expected that information to be useful later.

A last hint about baudline: Use anything but the internal copy+paste option of baudline. I did not look into it, but there is a difference between original data and data stored by baudline.
If you want to work with samples, pipe them into a file and use dd to cut out the parts you need.

Not unexpected, the original software did not work with my power-sockets.
I was very happy to find some ready to use C++ code called he853-remote that allowed me to send some initial signals with that new hardware.

The code is quite easy to read.
It uses 'HIDAPI' (libusb). Obtains a handle to the device via vendor and product id and then sends bytes to it.
The original code fills an array uint8_t rfCmdBuf[32] with data and passes it in chunks of 8 bytes to HE853Controller::sendOutputReport(uint8_t* buf) which prepends one null byte and sends those 9 bytes to the device. After those 4 blocks, the code sends a special block (also 9 bytes) to the device to trigger the sending.
Looking at the inline documentation and doing some correlation between what I do and what I can observe via baudline, I created a version of rfCmdBuf that works with my socket:
Which results into this sequence of 5*9 bytes:

The initial task is solved. I'm now able to switch the sockets with that USB device from a different vendor. But it somehow nagged me that I would have to collect the codes manually, so I went a bit further to learn about gnuradio and how to write modules for it.

The extra mile - a special decoder

Gnuradio is a set of libraries for building custom radio systems.
There is a nice GUI (gnuradio-companion) to draft the radio. That view transforms into python which can be manipulations if needed.
There are many guides on how to install and setup. Most of them advice you to use the latest and greatest version available. I give you the same advice. Compile from source. Since you need a working build environment to write own modules, it does make sense to have the 'normal' setup in place.

I checked a basic introduction into gnuradio and have to say that I am unfamiliar with most of its components since I miss the RF background.
But that did not stop me from having some fun with it.
At the beginning I tested what the components do by attaching GUI elements like a scope or histogram to them. This gave me at least a rough idea on the possibilities and if the components really do what I expect them to do.

After playing a bit, this was the simplest version I could get to work: 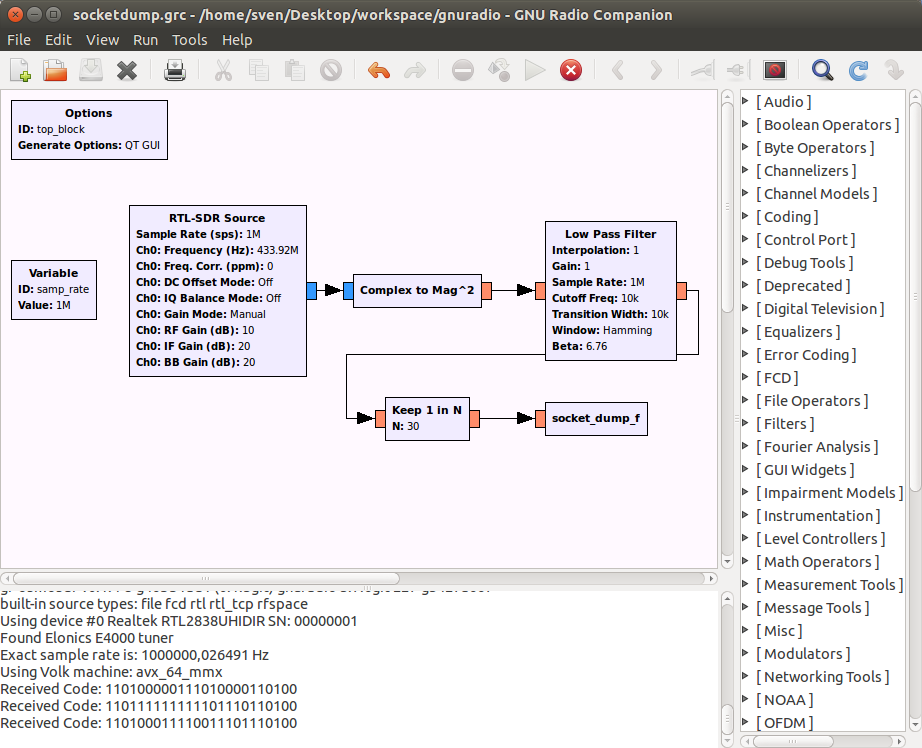 (The N=30 is just the first value I randomly used and then I build my module around.)

As mentioned, attaching a scope gives a little insight on what is actually happening:
Scope attached to the SDR:

Scope attached to the Keep 1 of N block:

The python code for my socket_dump_f module counts 'streams' of zeros or ones.
A lot of 1s mean that this was the burst that separates the original signals. I store a 'X' for that.
Many 1s do represent a binary one in the output code.
A few 1s do represent a binary zero in the output code.
So I store CODE X CODE X CODE ... into a string.
If I detect a long row of incoming zeros, I assume that if there was a packet, it is finished.
If my string has some data in it, I split at the 'X' and take some code from between. Not nice, but good enough for now.

The code for the module:

If you want the module available in gnuradio-companion, you need some kind of xml manifest.
sockethack_socket_dump_f.xml

Now that I have a comfortable way of dumping all codes from my remote, I know the following just from passive observation:

Once a find a bit time, I will do some experiments with the sockets to see if I can uncover some more insights via active testing.